In reading my last post, I realized that there exists within it an informational gap.  This is what happens when you forget that you didn’t actually post the message(s) you thought you did.  To wit: I went from planning the Digby mead to putting it into a carboy and storing it, without explaining anything about the actual production of said beverage.  That’s like counting, “One, three, and four,” without explaining what happened to “two.”  It sounds legitimate until you realize that something important is clearly missing.

My bad.  Brace yourself for the whole shocking story:

Last Saturday, I finally decided to collect the various ingredients I would need to concoct this mead.  A stop at the local grocery store netted me a set of cheese-cloth spice immersion bags and a gallon of spring water.  Then, I went to Northern Brewer and purchased one 3-pound jug of wildflower honey, a packet of wine-grade yeast, and a bottle of wine-grade yeast nutrient.  After this, I went and purchased the various spices from Penzey’s: East Indian Ground Nutmeg, Cracked China Ginger, Ground Cloves, and Ground Mace.  Given that the recipe requires that the spices be “grosly beaten and put in a Canvass-bag,” I figured it would be easier for all concerned if I simply purchased the pre-ground version of the spices.  The exception was with the ginger, which came in small, rock-hard fragments.

The trip was instructional for me, too: I learned that there’s a difference between nutmeg grown in the Caribbean and those grown in Indonesia.  The latter is coarser and less sweeter than the former.  I went with the East India version because I figured that this is what Digby had in mind when he penned the recipe.  The same was the case when I chose the ginger – crystalized ginger would be sweeter, and thus introduce additional sugars; I wanted to go with what I thought Digby actually used. 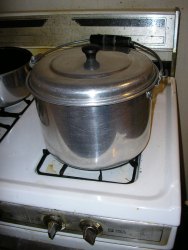 Once home, I realized that I’d made a major mistake: I needed a pot! I had forgotten about displacement.  In other words, I figured that I was making just one gallon of mead, but between a gallon of spring water and what was essentially a quarter of honey, there was going to be more than a single gallon in the pot.  My stove-top Dutch oven holds about one gallon, and I’m sorry – there’s no way that I was going to go back out and buy a larger pot.  The whole experiment seemed doomed until I remembered that I’d purchased a mid-20th century 2-gallon stove-top pot while visiting an antique mall some time ago.  Whoever owned it, used it with love because it’s got to be one of the cleanest pots I’ve ever seen.  If I had to guess, I’d say that it was 1940’s vintage, and it should have gone for far more than the $5 I paid for it.  No matter; it was perfect for my immediate predicament.  Into it went the water and honey, per the instructions in the recipe.  I had room to spare, which was good because I was going to need all of the space I could get.

The spices were next.  While at the store, I determined that a single nutmeg could produce roughly five (5) teaspoons of ground nutmeg.  (I realize this might sound dubious, but based on the nutritional label used by Penzey’s, this is right.)  Since I needed two nutmegs in the full version of the recipe, it meant that I needed considerably less – about two teaspoons – for the amount of mead that I was making, and the same was true for the ginger.  Because the recipe is sketchy with the other ingredients, I used roughly one-half teaspoon of ground cloves and ground mace.  I figured that was more than enough to satisfy the requirements.  I did not use the “canvas bag,” opting instead for a cheese-cloth spice immersion bag.  The spices were poured into the bag, which I then tied up and tossed into the honey-water. Now it was time to turn on the heat.

The recipe mentions an hour-long boil.  I set the flame low, and stirred it occasionally to prevent any damage to the pot and to circulate the bag-o-spices as much as possible.  The only issue I had with this was the aroma, and believe me when I say that there were several instances when I’d 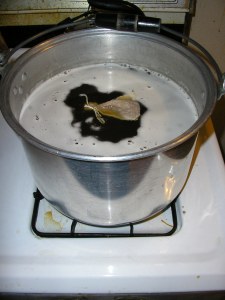 considered tossing the pot into the sink.  Boiling nutmeg, mace, cloves, and ginger – not a good presence on the nostrils!  Thank goodness for that pot’s lid.  The spice bag bounced around and in time, the mixture finally began to boil.  I interpreted the “hour-long boil” to mean to apply heat for one hour; in truth, I think that I let it actually boil for about 30 minutes, but it cooked for well over an hour.

Once I removed the heat, I had to add cold water to the mixture.  This is where I made my one true error: I’d forgotten to adjust the amount of water before I added it.  I should have added about 1 pint; instead, I added the full quart specified by the recipe.  If anything, I think that it diluted the mead’s overall effect, but I won’t know until it matures.  In any case, it was too late to do anything at that point, so I pushed on.  The water helps to add quantity, but it also serves another purpose: to “raise the scum.”  This is essentially the sediment – honey and spices – that settle at the bottom of the pot.  I didn’t expect there to be much because I’d been constantly stirring, but once the cold water was added, my misconception was quickly corrected.

“Scumming the pot” was the strangest part of the experiment.  I’ve never had to scum a pot of mead before, but then again, I don’t normally heat the mixture (the must).  Since this recipe required it, I figured I should do it, but . . . oh boy!  It’s like scum was just pouring out of the woodwork.  See the scum in the photo?  That’s nothing compared to what I actually lifted from the pot.  Worse, it seemed to have some intelligence, too – every time I tried to scoop on one side, it moved to the other.  Scumming alone took me at least ten minutes.  Between losing bouts with the scum, I activated the yeast, and once ready – and once the scumming ended – in it went.  This was the beginning of the end; once the yeast was gently stirred into the must, the hard work was effectively over.

The final act was to pour the must into the fermentation cask.  I added some nutrient and then sealed it shut.  The airlock was installed and the whole shebang went into the cool, cool basement.  I added small amounts (c. a teaspoon) of nutrient daily over the course of the next few days, and that was it.

So . . . there you have it; the story is now complete.  The missing information that should have been posted between “I’m thinking about making mead,” and “I made it and need to wait.”  This is probably the last major mead posting for a while.  I hope to keep you updated on the maturation process, but it’s a topic I fear that has outlived it’s welcome.  There’s always the plan to brew beer, I suppose . . .