Made a “Double Cheeseburger” pizza this afternoon and it pretty much turned out as expected. 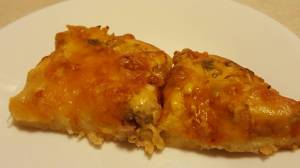 This might have been a no-brainer for others, but I’ve only recently started making my own pizzas.  I mean, I’ve make a pizza from scratch before, but it was the typical “cheese and sausage” type with tomato sauce and mozzarella cheese; nothing beyond that.  Then there were the chicken Alfredo pizzas, which really began because the local eatery that made them wanted too much for what little food they provided.  I thought, “Gee, I can do this,” so I did.  And there were the breakfast pizzas, but I gave those up years ago when I realized that the cholesterol was just too much per person.

But this marks a significant departure from what I’ve usually done.  And it’s actually pretty good.  Lots-o-cheese (hence “double” cheeseburger), but tasty.  I use a lot of onion and green bell peppers on those rare occasions now when I cook, and they really help with the flavor.  What’s interesting is the Worcestershire Sauce and the Liquid Smoke.  When I make hamburgers, I use both – in fact, everything here, save for the cheeses, the cheese sauce, and the crust, is what I incorporate into one of my homemade hamburgers.  So it should be no surprise that I would use that as the starting point for my pizza.  I can’t say that I’ll make it too often, but when I get tired of tomatoes and tomato sauce, then this will make a decent alternative.

This is, essentially, what I did.  Your results may vary. I would, however, be very interested in hearing the experiences of others with this dish.  I list “to taste” for some ingredients because these are things that I ordinarily add to excess; not everyone will share my enthusiasm for Worcestershire Sauce, so I don’t want you to feel that it’s a necessary component.  If you choose not to add it, so be it.  I felt, however, that it would create an interesting taste, and it did.